January 06, 2020
Today's blog entry is about Zara's Folly. This book is based at the stables where my daughter works - I did rename them and take a few liberties, but then when don't I. Any royalties from the sale of this book will go to the JAC Stables. Click on the link to find out what they do and how they help young people. 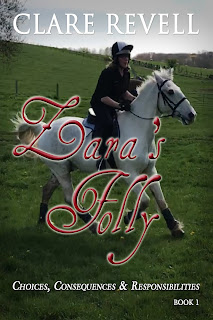 Blurb:
British equestrian rider, Zara Michaels, heads south on one last job for her father, an unscrupulous developer with his eye on a large piece of land. Zara’s task? To convince the owner to sell—by whatever means possible. Zara falls in love with the stables, but her father has a hold on her she can’t shake. If she fails, she'll lose the one thing she really loves.
Theo-James Greggson runs a horse stable with his brother, Xavier—only his brother is determined to sell his share. TJ can't afford to buy him out, plus he’d sorely miss his home and the stables which cater to disabled children—his life’s purpose. Despite the turmoil, he hires a cute stable hand harbouring a dark secret.
Can TJ untangle Zara from her past follies, or will the secret destroy them both?

Fun facts not many people know:
The horse on the front cover is being ridden by my daughter.
The horse picture used as a scene break was drawn by my daughter's friend.
The reason Zara was called Zara was because I didn't have a heroine who's name began with a Z. No other reason.
This story was originally part of a now defunct box set.
The recipe in the back is particularly yummy.
This was my second indie pubbed book.
And it's based in a place that really exists. Any real person was used with permission.

January 10, 2019
Ocean's Apart is now available as an Ebook and a paperback on Amazon. This one isn't your normal romance - the hero and heroine are not young twenty or thirty somethings. They are both in their sixties, mature, but still fun loving and willing to do new things. But then life doesn't end at forty, fifty or sixty. We are never to old to find love for the first or second time.