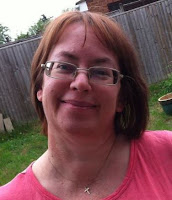 Clare is a British author. She lives in a small town just outside Reading, England with her husband, whom she married in 1992, their three children, and unfriendly mini-panther, aka Tilly the black cat. They have recently been joined by Hedwig and Sirius the guinea pigs. Clare is half English and half Welsh, which makes watching rugby interesting at times as it doesn’t matter who wins.

Writing from an early childhood and encouraged by her teachers, she graduated from rewriting fairy stories through fan fiction to using her own original characters and enjoys writing an eclectic mix of romance, crime fiction and children's stories. When she's not writing, she can be found reading, crocheting or doing the many piles of laundry the occupants of her house manage to make.

Her books are based in the UK, with a couple of exceptions, thus, although the spelling may be American in some of them, the books contain British language and terminology and the more recent ones are written in UK English.

The first draft of every novel is hand written.
She has been a Christian for more than half her life. She goes to Carey Baptist where she is one of four registrars.

She also has a newsletter. You can sign up for it HERE. Your email never gets passed on, and you won’t be inundated with mail either. It’s four maybe five times a year.

Book Blurb: While the Israelites struggle to occupy the Promised Land of God, Mahlah bat Zelophehad is orphaned and left to care for her four sisters. But daughters of the dead are unable to inherit land, and it will take a miracle for Mahlah to obtain the means to care for her sisters and uphold the vow she made to her dying mother.

Ocean's Apart is now available as an Ebook and a paperback on Amazon. This one isn't your normal romance - the hero and heroine are not young twenty or thirty somethings. They are both in their sixties, mature, but still fun loving and willing to do new things. But then life doesn't end at forty, fifty or sixty. We are never to old to find love for the first or second time.