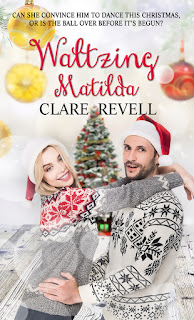 As head of the festival committee, it falls to Tilly Sullivan to organise the annual Christmas Ball. However when the venue burns to the ground with only four days to go, she's left with the huge task of finding a new location. But everywhere is booked solid.

Leo Keely has the only place big enough to host the party, however he has a huge issue with Christmas...and with Australian women whose surname is Sullivan.

A winter storm, fallen trees, and a corrupt mayor all conspire to make certain that this year's ball doesn't happen. But Tilly isn't a woman to give up. And if it means convincing Leo to let her use his venue, that's what she'll do.

The phone continued to ring. Curiosity got the better of her. Without opening her eyes, she reached out and grabbed the handset. “Matilda Sullivan speaking.”


“Have you seen the news?” Millicent Awning, her best friend and her personal assistant, spoke quickly and without preamble.
Tilly sighed. “No.” She wasn’t going to ask why, she could guess. “Why are you phoning me from the room next door?”
“I’m not. I’m currently stuck in traffic on the bypass. The Birches is on fire although you probably already know that. It’s all over the radio and probably the TV as well.”
“What channel?” Did she really want to see how bad the fire was? Yes. She had to know. She rose and crossed the room to the TV and reached for the remote control.
“Try the BBC first. But I imagine it’d be on all of them. It’s one massive fire. Twenty pumps in attendance at the last count.”
Tilly flicked on the TV and turned to the news channel. Shock ricocheted through her as she stood transfixed in front of the box. Flames surrounded the historic eighteenth century building, leaping from every window, licking up all four sides. An aerial view showed the roof had collapsed. It was worse than the initial phone call had made it seem.
A tiny squeak escaped and Tilly dropped to her knees on the cold office floor. What was she going to do now? A small fire they could have worked around, but this…?
“What are you going to do?” Millicent’s voice dragged Tilly’s attention back to the phone. The same thought she’d had, the same question she was now going to be asked a million times from several different people. Over and over again.
“I have no idea. I’ll see you when you get in.” Tilly ended the call and dropped the handset to the floor beside her. “Maybe.” She blinked hard and rubbed her hands over her face.
All her hard work gone. She’d spent the better part of the last week helping the owners of the gorgeous hotel decorate the ballroom and entrance hall to match her theme. Each year was different. This year, they told her she had excelled herself. Her best yet. The ball had sold out weeks ago. Now she’d have to refund all three hundred tickets. Not to mention compensate the caterers, musicians…
She broke off the thought. Guilt ran rampant. What if someone was hurt? Surely that should have been her first concern, not the fact her planning was now literally in ashes.
She groaned again. Rolling off her knees, she lay face down and gave into the urge to scream and hit the floor. It didn’t help. She sucked in a deep breath. She could almost hear her mother’s voice. “Pride cometh before a fall, Matilda, and a haughty spirit before destruction.”
She closed her eyes. Was it a sin to take a modicum of pride in her work? It’s not like she was doing it for herself? OK, she’d get as much fun out of the ball as the next person, but she was doing it for the town. It wasn’t Christmas without the ball. And now for the first time in the years she’d been doing the job, there would be no ball.

Fave Bible Verse:
Cast all your cares upon Him, for He careth for you. I Peter 5:7

Bio:
Clare is a British author. She lives in a small town just outside Reading, England with her husband, whom she married in 1992, their three children, and unfriendly mini-panther, aka Tilly the black cat. They have recently been joined by Hedwig and Sirius the guinea pigs. Clare is half English and half Welsh, which makes watching rugby interesting at times as it doesn’t matter who wins.