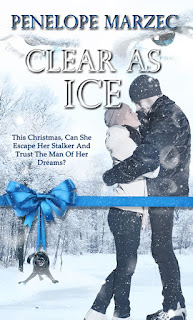 When Ethan's prayers for his mother's life go unanswered, he abandons his faith, tossing it out with his mother's Christmas ornaments. The loss of his hope leaves him empty and he begins to shy away from relationships, but when his dog Rufus, a rescue from a shelter, develops a fondness for a woman skating on the frozen lake behind his house, he's annoyed. Not only does he resent her using his pond, he doesn't understand her fear of dogs.
Haylie, once an Olympic figure skater, is afraid of more than just Ethan's dog. She lives in constant fear due to threats from a stalker, but one day Ethan's dog chases the danger away, so Haylie decides to try to lose her fear of dogs...But then the stalker's plans expand to include revenge toward Ethan as well. If they are to remain safe and live to see a happily-ever-after, Haylie and Ethan must put aside differences and learn to trust each other. This Christmas season promises to be the most challenging and the most meaningful of their lives.

She smiled as her soul filled to the brim with the glory of the morning. The ice was all hers and hers alone.
That’s when she the loud bark of a dog startled her.
“Rufus! Come!” The deep voice of a man echoed over the lake.
She stopped and turned. A large black dog ran towards her. Her pulse jumped. She didn’t trust dogs. Bitten on the lip when she was young, she shied away from dogs ever since. Could she skate faster than the dog could run?
“Rufus! Come!”
She glanced at the hill where a man climbed down, grabbing handholds on bushes and trees.
The dog, Rufus, didn’t stop or pay any attention to the shouted command but dashed toward her at a mad pace. She willed herself to be calm. She thought of possible ways to avoid an attack. She wore a thick down jacket and a pair of heavy leggings beneath her jeans. If the dog bit her, he’d get a mouth full of fabric first.
Ten feet away from her, the dog lost his footing on the slick ice. He let out a cry as he fell on his side and slid—and kept sliding. His couldn’t pull himself up. She moved in time to avoid a collision as the dog went sailing past her.
The dog cried pitifully as he drifted toward the opposite shore of the lake. She hoped he wasn’t injured, but helping out a wounded animal could be dangerous.
Meanwhile, the man descending the hill reached the bottom and started running and sliding across the ice.
“Hey! Miss! Could you grab Rufus’s collar for me?” he called out.
“Does he bite?” she shouted out the question. It echoed in the air. She guessed what the answer would be. The owner of the dog who bit her when she was young claimed her dog never bit anyone. But he bit her.
“Of course not!” The minute the words were out of his mouth, both of his feet went out from under him and he landed flat on his back.
Shocked into action, Hailey pulled the phone from her pocket and skated toward him. When she reached him, he was staring up at the sky with eyes as blue as the heaven above. She never saw a man with eyes of such an intense color. She stared in surprise for a moment until he turned his head toward her.
“Sir, should I call 911?” she asked.
“No.” He squeezed his eyes shut. “Please don’t. I’ll never hear the end of it.”
“Are you hurt? Did you hit your head?”
He opened his eyes and held up a leash. “Would you please fetch Rufus? He won’t hurt you. I promise.”
“What if he’s injured? Wounded animals bite.”
The man’s mouth turned down in a frown. “You’re afraid of dogs.”
“Yes,” she admitted.
He sighed, rolled over, and gingerly managed to get to his feet.
“Don’t run,” she advised. “Walk slowly.”
“Did you see which way he went?”
“He slid that way.” She pointed in the general direction. “There’s another little cove there with lots of marsh reeds.”
“Would you mind accompanying me in case I fall again.” His penetrating blue eyes gazed into hers.
She swallowed hard. Tall and handsome, the man’s chiseled features spoke of strength, but a touch of gentleness lingered around his mouth. Usually, meeting any stranger would put her on edge, but this man did not cause that reaction in her. Had he hypnotized her with his eyes?
She switched her gaze to the distant marsh reeds. “Actually, I was afraid I would fall when I came out here. It’s been a while since I’ve been skating.”
“You seemed to be doing fine.” He took firm but cautious steps on the ice.
“Were you watching me?” Her pulse began to race with anxiety. She’d skated in front of thousands of people in countless arenas, but this was different. This man could be some sort of stalker—like the one who drove her half crazy. She sensed someone was watching her and she was right. It was him!
“Rufus was watching you.” He shrugged his shoulders. “He barked and insisted I come to the window. I watched for a minute until I remembered I forgot to put out the garbage can for pickup. When I opened the door, Rufus ran out. I guess he really wanted to meet you.”
“Oh.” She whispered. Her suspicions were groundless. Once, countless adoring fans cheered for her. Now the only one intrigued with her was a dog. “I hope he’s okay.”
“Me, too.” With a somber note in his voice, he continued. “I need that dog far more than he needs me.”

Bio:
Penelope Marzec, a genuine Jersey girl and early childhood educator, has written twenty romance novels. Two of her inspirationals won the EPPIE award and one finaled in that contest. Her paranormal, Irons In The Fire,was a nominee for Romantic Times Reviewers Choice award.  Her cowboy romance, The Cowboy’s Miracle, finaled in EPIC’s eBook Awards.  When not writing, Penelope paints in oils, crochets, or sings while her husband plays the accordion. You can find her online at www.penelopemarzec.com, read her blog at http://penelopemarzec.blogspot.com, become a fan at www.facebook.com/penelopemarzecbooks, or follow her on Instagram at https://www.instagram.com/marzecpenelope/