Sunday's Child and the RNLI

Last time I blogged about my books, I did the whole of the Monday's Child series. Sunday's Child features a hero who works for the RNLI - Royal National Lifeboat Institution.

I say works. Actually almost every single person who works for the lifeboats is a volunteer. They have a pager, like Cal, and have to drop everything and leave at a moments notice, in order to save lives at sea. Sometimes, like the other week, it's a surfer who defied the storm warnings and decided to go surfing in Storm Ciara. The Hastings lifeboat almost capsized. You can watch a video that someone took HERE.

The RNLI is not government funded. They are supported by voluntary contributions, sponsored walks, runs, items they sell through their website and in their shops.

I visited a lifeboat station whilst writing the book. 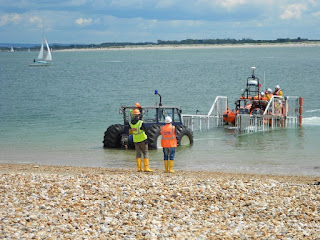 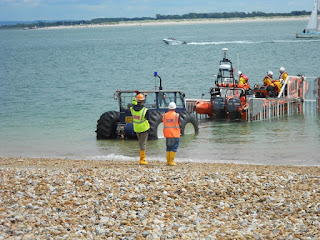 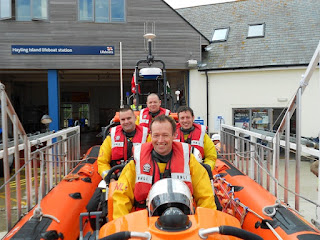 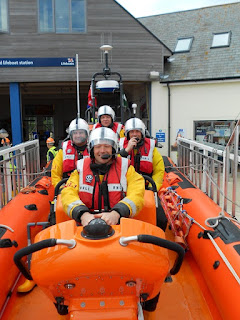 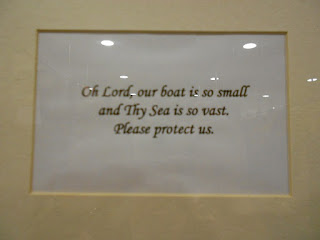 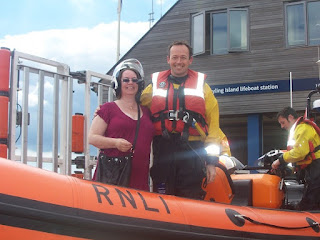 So, the point of this post. March is the extra mile for the RNLI challenge. So my arthritic knee and I are walking 31 miles in support. My sponsor page is HERE should you wish to sponsor me.  Should you be reading this after March and want to support the amazing work these unpaid heros and heroines do please do so through the link below.

You can find out more about the work of the RNLI on their website. 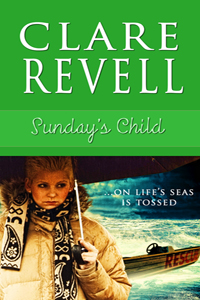 Sunday’s Child on life seas is tossed, awaiting the lifeboat that rescues the lost…

Hattie Steele feels like the world is passing her by. Her entire life revolves around the guest house she runs in Headley Cross with her overbearing twin brother. He even attempts to undermine her friendship with a handsome guest. Not that famous ex-footballer, Callum Trant would ever give her a second glance. Hoping to regain control of her life, Hattie takes a well-earned holiday with her aunt on Penry Island.

After retiring from football, Callum Trant divides his time between the family business and volunteering as helm officer on a lifeboat. Danger is nothing new for him. But when he’s called out on a shout and finds the beautiful innkeeper from Headley Cross on a sinking vessel, Callum realizes his heart is in danger.

But could Hattie ever forget his womanizing past and feel the same way? Or will a dangerous rescue end the relationship before its had time to grow?

extract
Cal turned the boat and headed into the heart of the storm, keeping the bow of the boat into the breaking waves. Visibility was down to five feet.
“There’s another flare,” Sam yelled. “But doesn’t look the same direction.”
“Radar’s got something.” Cal squinted at the screen.
“There. Two o’clock, there’s a light.”
Cal aimed the boat at the faint light he could see between the towering waves. As he grew closer he could see the hull of the boat with a figure clinging to it. “Phil, toss the rope to him. If he catches it, bring him in that way. If not rope up and go get him.” He touched the mic button. “Penry base this is Ray of Hope. Found the Petunia Bay. We will need assistance to tow the capsized boat out of shipping lane. One in the water.”
“Roger that, Cal. Will send out the RHIB.”
Cal brought the boat around, bringing it in closer to the wrecked cruiser. He watched the figure on the boat catch the rope. Then he brought the lifeboat right alongside the upturned hull.
Phil and Sam grabbed the man and pulled him into the safety of the lifeboat.
“Is there anyone else with you?” Sam asked.
“Harriet. Where is she? Did you pick her up, too?”
Hattie’s out here? A stab of fear filling him, Cal turned in his seat, hoping he was wrong. The soaked figure was as unmistakable as his clipped posh accent. He wanted to berate the man for being stupid, but now wasn’t the time. “Where did you last see her, Markus?”
“Didn’t you find her yet?”
“We barely found you. Where did you last see her?” Oh, God, keep her safe out here.
“Before we capsized. The boat flipped over so fast. When I came up she was gone.”
Trevor turned the searchlight on the water around them.
“Sam, check Markus over.” Cal yelled, fear twisting his gut.
“I’m fine. Harriet was hurt before she went into the water. She hit her arm on something, and couldn’t use it.”
“You’re being checked over regardless. Trevor, rope up in case you need to go in. If she’s hurt she won’t be able to hold onto the rope.”
“Aye, aye.”
Did he imagine a faint call for help carried on the wind? “Aim that light over to the right.” The search light caught sight of something yellow floating on the waves in the distance. Cal turned the boat around on a dime. Please let it be her.
“There!” Sam yelled.
Cal nodded and accelerated the boat towards the small yellow shape the light picked out. He came in close to the figure and Trevor dived over the side into the maelstrom. Waves crashed over and around them, spray threatening the stability of the boat.

Pamela S Thibodeaux said…
Wonderful thing to do, Clare!
Good luck and God's blessings on your walking.... perhaps HE has healing for your while you walk for others.