Grace Kitchen Book One is here!

August 19, 2019
The Grace Kitchen books are starting to go live with my Andante, Andante. 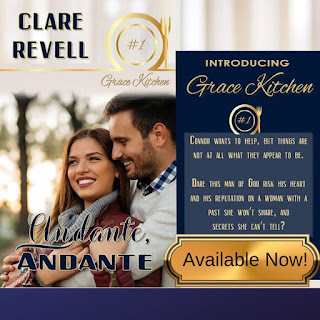 To Love and To Cherish, book 2 by Marianne Evans releases in two weeks.
One Harvest Knight, book 3 by Delia Latham follows on September 14th. 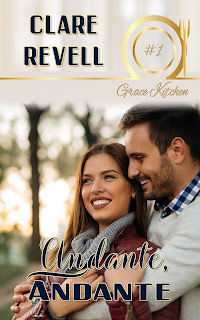 Pastor Connor Butler is more used to shepherding his spiritual flock than saving injured cats. Yet when he finds one trapped behind a false wall in the New Life Centre storefront church, he takes the frightened feline to the local vet.
A woman of mystery and keeper of secrets, Vet Teagan Rhodes is new in town. She stays to herself and quietly goes about doing what she loves to do—healing the injured animals of Harvest, Tennessee.
Intrigued by the lovely pet healer, Connor invites her to help organize a dodgeball game fundraiser for Grace Kitchen. Then trouble comes calling in Harvest, and Teagan appears to be somehow embroiled in the ruckus. Connor wants to help, but things are not at all what they appear to be.
Dare this man of God risk his heart and his reputation on a woman with a past she won’t share, and secrets she can’t tell?


“Church isn’t for people like me.” Teagan frowned at her soup. Church was for good people who weren’t living a lie.
“Actually,” said a voice she wasn’t expecting, “church is for people exactly like you and me. You should come along and see for yourself.”

“Sorry to interrupt.” Connor apologized as the pretty vet almost leapt off her seat, and a rosy hue tinted her cheeks. He hefted the box he carried and smiled. “I’m also sorry to scare you. It wasn’t my intention.”
“Grab yourself a seat, Pastor Connor,” Bess said. “I’ll get you some dinner.”
He shook his head. “Thank you for the offer, but I have something in the oven at home. I came by to bring you this.” He held out a large, overflowing box of groceries. “Marshall Sanford from Harvest Groceries asked me to bring this over. He said to tell you to put the chilled goods in the fridge immediately this time.”
Cora took the box. “Thank you. He’s a sweetheart. But, don’t you go telling him I said that. Don’t want to give him a big head or an ego any bigger than the one he already has.”
Connor grinned. He mimed locking his lips and tossing away the key. “My lips are sealed.”
Bess rose. “I’ll give you a hand putting them away.”
Teagan looked down at the bowl as they left.
“Tactfully done, or not. Those two never change. But then I wouldn’t want them to.” Connor dropped onto the chair opposite her. “Will you come to church on Sunday?”
“I’m on call.” She stirred the soup and raised a shaking spoon to her mouth.
Was he really that frightening? He didn’t think he’d done anything to cause this reaction in her. “Bring your phone with you. Doc Steel brings his when he’s on call. I don’t have a problem with work phones going off. It’s everyone else’s.” He grinned. “I remember one service in Nashville, someone’s phone went off mid-sermon and they insisted on answering and holding a conversation.”
Teagan frowned. “That’s just plain rude. A bit like me deciding to check my email right now.” She pulled out her phone and waved it at him. “Not that anyone ever emails me. I’m not an online kind of girl. Not even one of those photos of every meal you ever ate accounts.”
“I have one of those, but rarely put dinner photos on it.” Connor laughed. “I’ve yet to cook anything worthy of a photo.”
Teagan half smiled. “I don’t like the way the photos all get geo-tagged. Kind of an ‘I am here’ announcement to the whole world. I’d rather stay incognito and invisible.”
He nodded. “Have you met Doc Steel yet?”
“No. I haven’t needed a doctor.”
“His office is over on Main Street, although he does work at the hospital as well.”
“Not needed one of them either. Don’t really like doctor’s much. Or dentists.”
“Who does?” He studied her. Her barriers were well and truly up and the last thing he wanted to do was alienate her more. “Well, I need to get on and go home before my dinner burns. Think about Sunday and what I said. Church isn’t for perfect people. It’s for the broken, wretched, and lonely.”
He rose and headed outside, the pretty English vet very much on his mind. Something was bothering her. Maybe finding Mr. Fisher earlier that day had gotten to her—that would be enough to shake anyone to the core. Or the upcoming surgery on the cat, but he didn’t think so. The haunted look in her eyes made him almost certain she was running from something big.
Footsteps clattered over the decking behind him. “Just so you know, I’m not broken. Or wretched. And I’m certainly not lonely.” Her voice was more than a little irate.
He smiled to himself, making sure to wipe it from his lips before turning around. “Glad to hear it.”
She nodded curtly. “And I’m not aloof or anything else you Yanks think we Brits are.”
He winked, unable to resist. “Actually we’re too far south to be classified as Yanks.”
“Whatever.” She spun around, then glanced back, a glimmer of interest in her gaze. “Really? I thought that was a generic term for all Americans.”
He nodded and waved a hand. “I’m afraid it only applies to the north of the country, but carry on insulting me by all means.”
“Oh, I’m done. I just wanted you to know I’m not any of those things you said I was.”
“Okay, thank you. I’ll be sure to keep that in mind for next time.”
“You do that.”